It feels weird out there, bright but grey, like hot ash settling on stone. It's a storm-gathering day, all the streets hunched and hurrying and hooded. I slipped out into the drizzle to get a hot chocolate from the sandwich shop, warmed my hands on it as I carried it back to the office, more for the comfort than the heat. (It's no coincidence that "hot mug" has a "hug" wrapped around its outside.) I want to be at home with a warm drink and the crossword, but I'm doing the best I can on my own in the office: door closed, music out loud but on low. Eventually I'll have to cycle home in the dark and the rain, and I'll put it off until the building gets dark and echoey. In my waterproofs I feel like a boiler-suited B-movie alien, shambling wetly through the dark.

There are a lot of rants going round my head at the moment on the theme of science, knowledge, ignorance, learning, information literacy, and what makes a thing worth knowing. I am emphatically not claiming any expertise in any of these things. At the moment I'm just writing around things I observe and trying to draw lines between them.

Today's irritation (I wish these things were the bit of oyster-grit around which a pearl forms, but I fear they're actually just the bits of shoe-grit around which a hole in your sock forms) was this popup 'poll' (advert) from Shell which pasted itself like Bill Stickers over the article about cycling which I was trying to read: 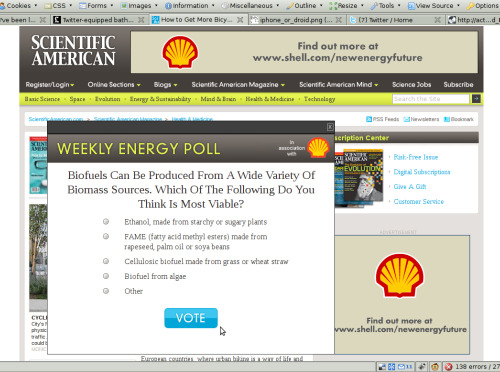 "Biofuels Can Be Produced From A Wide Variety Of Biomass Sources. Which Of The Following Do You Think Is Most Viable?"

Then there are poorly-defined questions where people's opinions are utterly useless, like this one. Look, if you want to know which biofuels are more efficient (in terms of, say, energy generated per weight), this is something you can measure. If you want to know which biofuels can be grown most efficiently (in terms of, say, yield per area), or are the most hardy (most likely to grow in adverse conditions), or are the least polluting when used as fuels (in terms of ppm of pollutants), these are things you can measure. If none of these are what you mean when you say "most viable", you're going to have to define the terms of your question a bit better. The only context I can think of in which people's opinion would be the most important factor here is if you were trying to measure which biofuels would meet with the least public resistance; for instance, whether people would feel happier about running their cars on palm oil, or human bones, or rabbits.

Now I know this is an advert, and adverts want to provoke a reaction, because no publicity is bad publicity. But the advertisers know that this sort of thing makes people want to click on it, want to record their opinion. And, on the other side of the screen, there seems to be no shortage of people who want to hear the opinions of ignorant people -- often in preference to hearing the opinions of experts. "Let's find out what the man on the street thinks," we say. When it comes to something which is manifestly measurable and testable, I don't actually give an atom of biomass what the man on the street thinks; I want to know what the person with the tools to measure it, the expertise to interpret the measurements, and the eloquence to explain it thinks. In my examples above I've doubtless missed a lot of sensible scientific questions that could be asked about biofuels; the point is, I can pick half a dozen more meaningful questions to ask (assuming you want to get a meaningful answer -- and then we're back to begging the question again) than the one in the poll, but I wouldn't be asking the internet. This is more like the sort of questions that get asked on the BBC website's Have Your Say (which, as you probably all already know, is best viewed through the hilarious bile-coloured glasses of Speak You're Branes): none of which are actually questions, even if they're phrased as such. They're not looking for an answer; the point is quite simply to let people Have Their Say. The content of what they're saying is irrelevant; they might as well just say "Please type in the idiot box" or just "Your bile here".

I think there's a kind of amateurism and maybe even primitivism at work here: a sense that the opinion of "the people" is somehow more real, more authentic, and hence more important than the opinions of "the so-called experts" (who are, of course, still people, but are somehow cheating by actually knowing stuff about stuff).

addedentry says (my armchair research assistant!) that it's the ideal of democracy taken to its extreme; he may have a point. I don't know where it comes from (and I'm not trying to answer all the questions here) but I want it to go back there. I think there's also a sense that Being Heard is vitally important -- which in many contexts it is -- whether or not you have anything to say.

In a sense, I guess that's the human condition: shouting into the void to try to prove to yourself that you exist. Thank Dawkins it's Friday!

Stopping here because this already overlaps slightly too much with the second half of the post about ignorance (which is still only in draft form mostly IN MY HEAD). Maybe one day I will marshall all this content into something more sustained and structured.
Collapse